The Gran Teatre del Liceu 2010/11 season opened with Pina Bausch's choreographed version of Gluck's opera Iphigenie auf Tauris. With a libretto by Nicolas-François Guillard (1752-1814), the work is inspired by the tragedy of Euripides and was the German choreographer's first dance-opera, choreographed in 1973.

If Gluck was one of the great reformers of opera history, then Bausch is undoubtedly a true innovator of dance history. Probably for this reason, the work intensifies the living presence of the Greek consciousness, mirroring the conflicts and emotions present in our own lives.

As Bausch was to show two years later with Orpheus and Eurydice in 1975, the journey towards the depths of drama and her reflection on the human soul place her among the greats, like an unrivalled master and artist of dance who, through her genius, has elevated dance to a supreme art form.

Bausch has an extraordinary talent for narrating myths and stories loaded with immense, heavy conflicts, but without losing the freshness and essence that support them.  The German choreographer merged the boundaries between music and opera through vital and expressive dance, demonstrating a skill that few possess, and created an Iphigenie auf Tauris in which the dramatic elements of the Greek tragedy form the axis of the work, thus achieving narrative power through the purest of dance.

Who but a true exponent of German Expressionist dance could move in harmony with such deep and sincere pain? In this work Bausch again demonstrates that she is one of the greatest poets of contemporary dance.

Today, when any dancer who puts steps to music is called a great choreographer, Bausch is worthy of the title. She possessed a genius rarely seen in others and had a profound knowledge of the meaning of universal, archetypal symbols and their connection to art and rituals in relation to human beings. It is all of this, in addition to a deeply emotional and refined cultural and artistic style, that formed part of each influenced subsequent eras and each of her creations.

The sublime power of Gluck's music, together with the delicately feminine costumes and stunning scenography (because of its simplicity and minimalism) -both the work of Bausch herself and Jürgen Dreier- provide a sublime Iphigenie auf Tauris. The extraordinary graceful dance scenes take the audience on a modern journey of emotions.

In this dance-opera, singers and dancers work together but from different locations, each contributing their art to breathe life to the story's characters. There are thirty dancers from the Tanztheater Wuppertal Company, and nine singers flanking both sides of the stage. The music was provided by the Julià Carbonell de les Terres de Lleida Symphony Orchestra and the Palau de la Musica Chamber Choir, situated in the pit below the proscenium.

All these artists, under the musical direction of Jan Michael Horstmann, and in collaboration with the Tanztheater Wuppertal, achieved a truly accomplished work, witnessed by the audience at Barcelona's Liceu, who responded with a well-deserved ovation.

The main characters were Ruth Amarante as Iphigenia, Pablo Aran Gimeno as Orestes and Fernando Suels Mendoza in the role of Pylades. 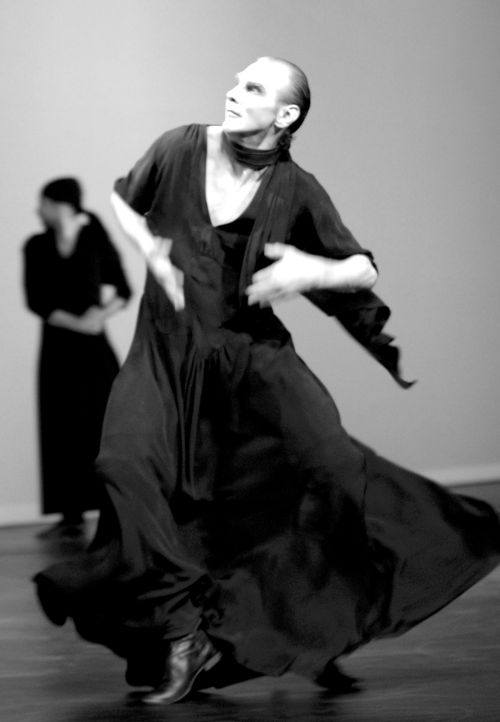 The expressiveness of the performers remains strong and solid, following the eternal path created by Pina Bausch, as well as her signature style: wide, circular port de bras accompanied by significant and visible, rhythmic movements of the torso in time with the musical phrasing. A head with loose hair accompanies each of the movements or gestures (small where the choreographer is large), but above all, the work is performed by a totally homogeneous and human corps de ballet with no leading figures. Truly a Company that warrants a capital C.

The Scope of Relationships between Dance and Painting